Can I Disconnect the Ceiling Fan Without Turning Off the Power? 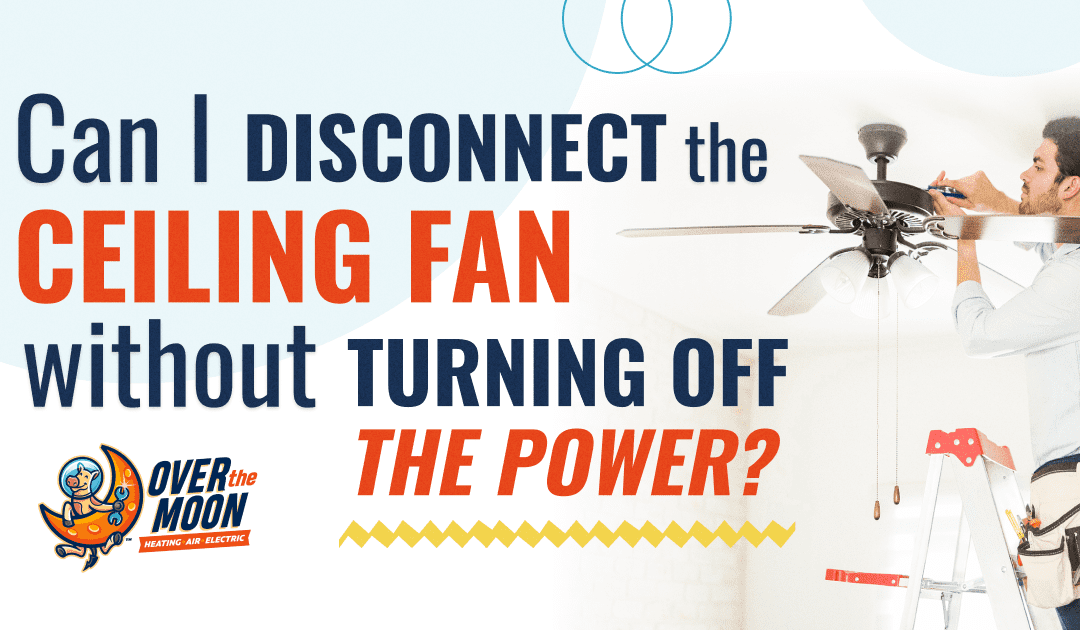 Removing a ceiling fan can be a challenge, but not impossible for a DIYer. Several precautions must be taken, including turning off the power to the circuit. There are many reasons for this:

Double Check the Power Is Off

After you’ve turned off the power, use a voltage tester to confirm there’s no electricity flowing through the wires. This goes for cleaning the fan as well. Shutting the power ensures water or other fluids do not come into contact with electricity.

Simply turning off a switch also isn’t enough because it can be accidentally flipped back on. By habit, a family member may turn it on when entering the room. It’s easy to forget such a small detail, even without realizing they may be putting you in danger. Also, leave a note by the circuit breaker you turned off, so everyone at home knows to leave it alone.

How Does a Shock Occur?

When you touch a live wire, electricity will pass through your body. A shock occurs when you’re touching the electrical source and ground or another wire. Your body is essentially completing a circuit.

Without being grounded or near another wire, it’s possible you won’t get shocked. However, attempting to follow this principle is extremely risky. You may be grounded without knowing it and electricity can jump from one place to another, meaning you can complete the circuit without being in direct contact with a wire or ground.

An electrical shock itself isn’t the only risk you face. The experience can be extremely painful, while high amounts of current can render you unconscious. There’s also the risk of electrical burns as well as injuries that can occur due to, for example, falling off a ladder. In the U.S., about 30,000 people are injured every year by electric shocks, according to the National Institutes of Health.1

How to Safely Disconnect a Ceiling Fan

After shutting off the power, follow these steps to safely disconnect and remove the fan:

Disconnecting and/or installing a ceiling fan isn’t for everyone. At Over the Moon, our technicians are trained and certified to install, update, and replace ceiling fans across our Milwaukee, WI, service area. They can safely disconnect a ceiling fan and have the knowledge and tools to do so quickly. They’ll also help select and mount/connect a unit that meets your needs. To schedule ceiling fan installation in your home, call 262-218-2857 today.