Surge vs. Fault: What Is the Difference? 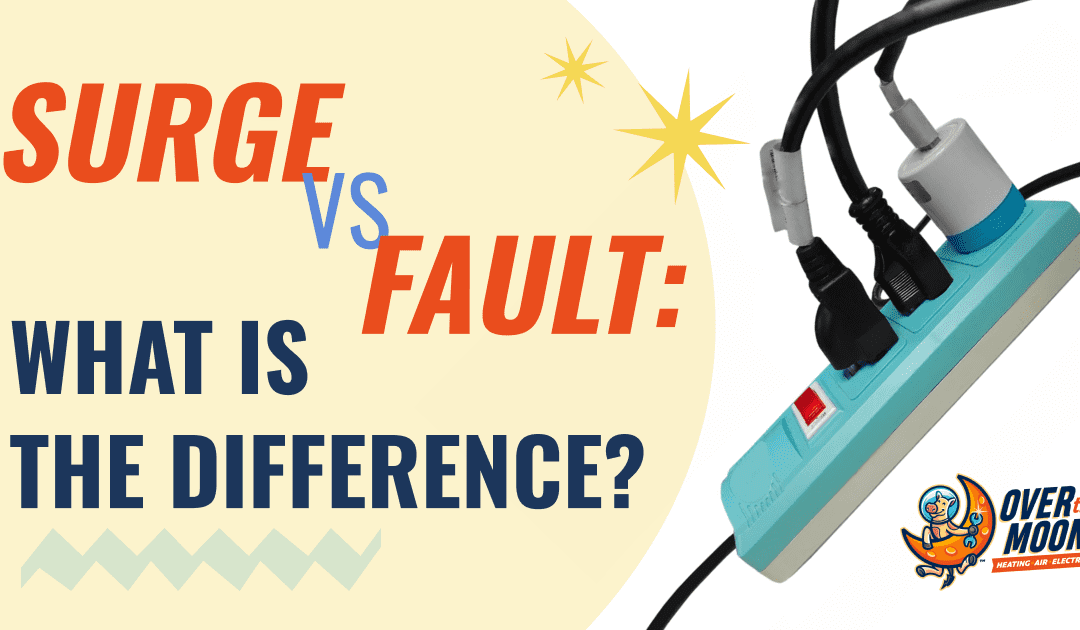 Electrical surges and faults are among the most serious issues affecting your electrical system. A surge or fault can damage equipment and cause a fire. While both are common hazards and may go unnoticed initially, they are two different phenomena.

What Is an Electrical Surge?

A power surge is a sudden and unexpected increase in voltage. Normally, voltage fluctuates somewhat; it can do so without harm at variations of up to ±10%. Most surges originate from inside the home at appliances such as refrigerators and air conditioners. But surges can also be caused by lightning, downed power lines, or issues with transmission lines, transformers, or other utility equipment.

Surges can be very large and cause instantaneous damage. Or, they can be small and frequent, causing damage over time that shortens the lifespan of appliances. Signs of a power surge include:

People often mistake a power surge for an outage. However, a power outage is a loss of power. A power surge is an increase in voltage. In both cases, appliances and electronic devices may turn on and off but in a surge, the effects are usually more temporary. An outage lasts for a more extended time, from a few minutes to a day or two, or longer.

If the cause isn’t corrected, power surges can overheat appliances, which can break down or catch fire. Circuit breakers are designed to cut power if the voltage increases to unsafe levels. But a bad breaker can cause a surge as well, so it’s important to investigate the source of the problem right away.

What Is an Electrical Fault?

The main difference between a surge and a fault is that an electrical fault is an abnormality in the circuit. It occurs when electricity leaves its intended path. This can cause overheating, arcing, power system instability, equipment damage, and fires or explosions.

One of the most common causes of fault-related failures is degraded/aged insulation. Often caused by wear, faults can also happen due to heavy winds, broken power lines, vehicle collisions, or trees falling on power lines. Lightning can also cause faults, as can switching surges. A transient overvoltage can damage a line and insulation apparatus, especially considering the rapid rate that voltage rises during a switching operation.

A short circuit, also known as a shunt fault, is when the current flowing through the circuit damages the current-carrying conductor’s insulation. It’s the most common and dangerous type of fault. But faults take many forms, including:

Contact Over the Moon If You Have a Surge or Fault

The cause of a power surge or fault must be corrected before more serious issues occur. The team of licensed electricians at Over the Moon is experienced in making quick repairs and installing ground fault circuit interrupters and surge protectors. Based in Oconomowoc, WI, we serve the entire Milwaukee area and cover all our work with a 100% Satisfaction Guarantee. Contact us or schedule service online, or call 262-218-2797, and we’ll promptly send a crew to your home.