When to Get an Electrical Panel Replacement? 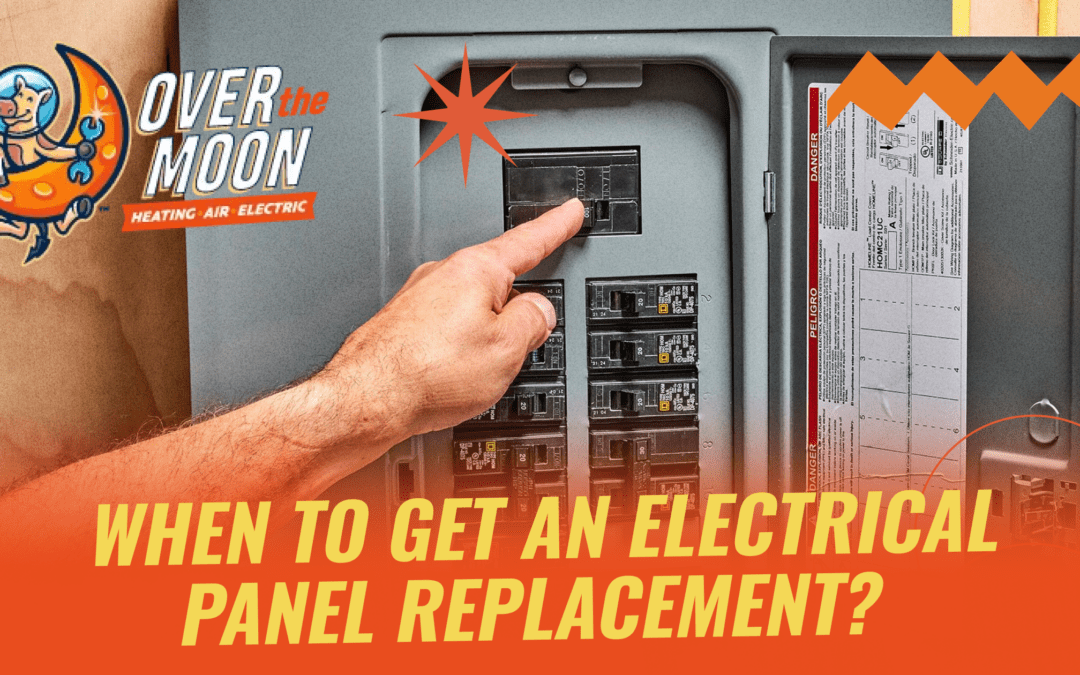 Sometimes, one bad circuit breaker can be replaced on its own. Like all electrical and mechanical components, breakers eventually wear out. But although an electrical panel can last 40+ years, it can be hard to tell whether it’s necessary to replace the entire unit. The symptoms of breaker and panel problems are often similar, so we will detail the signs it’s time for electrical panel replacement.

A breaker may trip because it is faulty or the circuit is overloaded. Turning the switch off and then on again should resolve the problem. But if the problem recurs soon after and becomes more frequent, you’re at risk of a home fire. Components within the panel may be defective. An electrician will check whether the panel should be replaced and if your home wiring needs an upgrade.

Your Electrical System Is Outdated

Older electrical panels may only support 60 amps of power, which is no match for today’s 200-amp systems needed to run modern appliances. Even worse is a breaker box with fuses, which no longer meet electrical safety standards. Having one of these can result in a penalty by your insurance company. Installing a modern circuit breaker panel will improve your safety and save you money over the long run.

One flickering light may have an issue with its own wire. If all the lights in your home start flickering or dimming, contact an electrician. The problem may be systemwide due to an overload, electrical meter problem, or a bad circuit breaker panel.

Plugging in a Certain Appliance Causes an Outage

This is typically a sign your electrical system can’t handle the power required by this appliance. The problem may seem small and simple, but it can indicate something more significant. The wiring may not be the right amperage. Fixing the issue may require both electrical panel replacement and rewiring your home.

The Breaker Panel is Rusting

If there’s rust on the surface of the panel, its internal components are probably corroding as well. Replacing the panel will prevent a serious failure and even an electrical fire. The same goes if there are scorch marks or other physical damage to the electrical panel.

A Burning Odor from the Panel

A burning smell can have many sources, but is certainly a sign of a serious problem with a breaker panel. There could be a damaged breaker or bus bar, or possibly exposed wiring. Contact an electrician right away to find and fix the issue, as an electrical fire may be starting or in progress.

The Electrical Panel Is Buzzing

If the panel or a breaker is buzzing, sparks can fly at any moment, potentially igniting a fire. A buzzing sound is one of the leading signs of electrical trouble. It likely means the panel is ready for replacement.

The Panel Is Hot to the Touch

Overheated wiring or other electrical parts is a leading cause of home fires. It’s not always because a breaker has gone bad. Standard circuit breakers are rated for a temperature rise up to 122℉ and GFCI and AFCI breakers can run 15℉ to 20℉ warmer. A hot panel is a sign something is seriously wrong, and an electrician has the training and tools to find out what it is and fix it.

Melted wires mean the system is overloaded and overheating has compromised the system. There’s no other solution at this point than electrical panel replacement. Otherwise, the energy load in your home will be enough to start a fire and other serious problems.

Contact Over the Moon to Install a Modern Circuit Breaker Panel

The electrical panel is the single-most important component of your electrical system. It distributes power to all the circuits and wiring systems. If it malfunctions or isn’t up to par, current won’t flow properly to high-power and low-power devices. Sparks, shocks, and fires can occur. If you notice any of the signs above, contact Over the Moon for electrical panel services and to perform electrical panel replacement if necessary. Call 262-218-2857 to get started.